Malaria infections often consist of a mix of drug-sensitive and resistant parasites. In theory, sensitive parasites are expected to suppress resistant parasites. Drugs could remove this suppression and thus give resistant parasites an advantage, a process known as “competitive release”. We found support for this hypothesis in rodent malaria: drug-sensitive parasites suppressed resistant parasites, and drug treatment removed this competition and led to increased transmission of resistant parasites. Recently, we have collaborated with Venkatachalam Udhayakumar (Centers for Disease Control and Prevention), to determine whether within-host competition occurs between malaria parasites in humans, and whether drug treatment can result in competitive release. Using cross-sectional studies in Ghana, Tanzania and Angola, we found strong evidence for competition, with malaria strains that are sensitive to the drug chloroquine suppressing chloroquine-resistant strains. We also found strong evidence for a cost of resistance, with resistant strains reaching lower densities in humans than sensitive strains. We are currently developing and analyzing mathematical models to determine the role of within-host competition in the spread of drug resistance. We are also analyzing samples from a longitudinal study in Tanzania to determine whether drug use results in competitive release of resistance within patients. 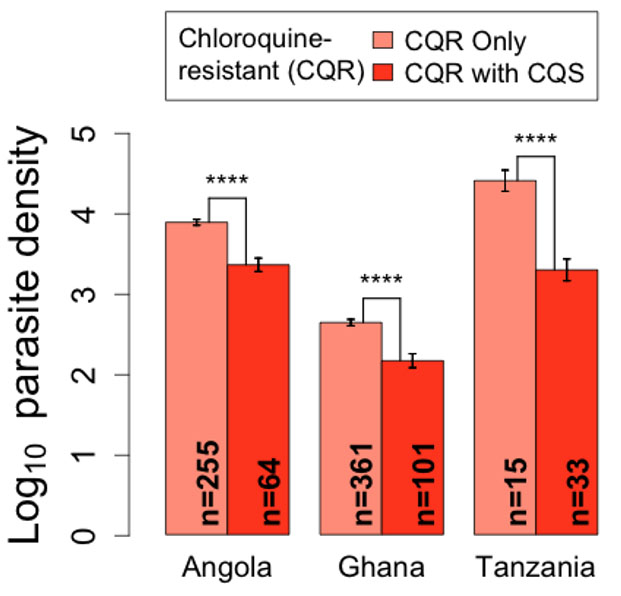